Carnival of Genealogy: My Famous Canadian Ancestor, the first Canadian astronaut to walk in space 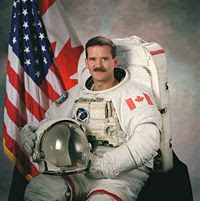 Well he is not a ancestor but my most famous Canadian relative is astronaut Chris Austin Hadfield (born August 29, 1959) who was the first Canadian to walk in space. I have never met Chris and I dont expect I ever will, but he is my fourth cousin. We share 3rd great-grandparents Edmund Facey (1813-1899) and his wife Mary Little (1814-1883)

Chris was born in Sarnia Ontario, was a Wolf Cub and later joined the Royal Canadian Air Cadets' 820 Blue Thunder Squadron. In 2005, the squadron was renamed 820 Chris Hadfield Squadron in his honour.

Chris trained as a pilot in the Canadian Forces and was top graduate in his jet training class in 1983. He flew CF-18 fighter jets on NORAD missions for three years.

In 1992, he successfully competed with more than 5300 applicants to join Canada's space program, and was assigned to NASA's Johnson Space Center

For his first shuttle mission in 1995, Hadfield was Mission Specialist #1 on Atlantis, operating the Canadarm for NASA's second space shuttle mission to rendezvous with the Russian Space Station Mir. On his next mission, as Mission Specialist on Endeavour in 2001, Hadfield spent 14 hours, 54 minutes outside the craft on two spacewalks, including the first by a Canadian.

Read more about Chris on Wikipedia or in "A History of the Facey Family of St. Winnow Parish, Cornwall" compiled by Jean Spearin. 1995
Posted by Olive Tree Genealogy at 7:32 PM

Greetings Brian,
Way cool! You definitely have some bragging rights. Hopefully you will get to meet him someday. Glad you participated in the CGC. Thanks.
Kathryn

Very interesting, Brian. Glad to read about someone I didn't 'know' and good for you to trace the relationship!