Two New Video Releases in Voices of Genealogy Series
Donna Valley Russell, FASG
“Becoming a Genealogist and an Editor”
and
Donna Valley Russell, FASG, with George Ely Russell, FASG, FNGS
“Married to Genealogy”
arlington, va, 27 december 2012: The celebration of the National Genealogical Society Quarterly’s 100th anniversary closes the year with the release of two new videos featuring Donna Valley Russell in “Becoming a Genealogist and an Editor” and George and Donna Russell together in “Married to Genealogy.”
An expert in Western Maryland genealogy, Donna tells the story of her path from census taker to genealogist and editor. Originally from Michigan, Donna learned her skills there and served as editor of the Detroit Magazine for Genealogical Research. After she and George married, she moved to Maryland and founded her own journal, Western Maryland Genealogy. In 1985, based on the quality and quantity of her scholarly publications, she was named a fellow of the American Society of Genealogists. Her published works include Frederick County, Maryland, Wills, 1744-1794; First Families of Anne Arundel County, Maryland, 1649-1658; Frederick County, Maryland, Genealogical Research Guide; Michigan Censuses, 1710-1830; Selby Families of Colonial America; and The Ark and the Dove Adventurers (co-edited with George).
The second new video takes a lighthearted look at the genealogy scene with the George and Donna Russell cocktail hour. George Ely Russell, who first appeared in the Voices of Genealogy in January 2012, is also a fellow of the American Society of Genealogists and of the National Genealogical Society. He was the editor of the NGSQ from 1971-1986.
The videos were produced by award winning filmmakers Kate Geis and Allen Moore from interviews with Melinde Lutz Byrne, CG, FASG, co-editor of the NGSQ. Donna Valley Russell in “Becoming a Genealogist and an Editor” and Donna and George Russell in “Married to Genealogy” are now playing at http://www.ngsgenealogy.org.
Previous releases in the Voices of Genealogy archive now on the NGS website (http://www.ngsgenealogy.org) present Mary McCampbell Bell, CG; John Frederick Dorman, CG (Emeritus), FASG, FNGS, FVGS; David L. Greene, PhD, FASG; Frederick C. Hart Jr., CG, FASG; Ronald Ames Hill, PhD, CG, FASG; Henry B. Hoff, CG, FASG, FGBS; Harry Macy, FASG, FGBS; George Ely Russell, FASG, FNGS; and Shirley Langdon Wilcox, CG, FNGS.
Video interviews with leading genealogists represent just one of the many opportunities NGS offers its members for honing their skills. Members receive the society’s outstanding quarterly publications, the NGSQ and the NGS Magazine, and can also take advantage of free courses and significant discounts on publications, courses, and the NGS annual conference to take place in Las Vegas, Nevada, 8-11 May 2013; Richmond, Virginia, 7-10 May 2014; and St. Louis, Missouri, 13-16 May 2015.
Founded in 1903, the National Genealogical Society is dedicated to genealogy education, high research standards, and the preservation of genealogical records. The Arlington, Virginia-based nonprofit is the premier national society for everyone, from the beginner to the most advanced family historian seeking excellence in publications, educational offerings, research guidance, and opportunities to interact with other genealogists.
Posted by Brian at 10:04 AM No comments:

We don't often think of a cemetery as being a great place for wildlife but life can thrive in the most unexpected places. The rare Orb Weaver spider was spotted last December during a bat survey as part of the Wild London Inclusive London project held by staff at the London Wildlife Trust. Officials were working with the locals and staff of the Highgate Cemetery. A large population of these spiders was seen in the tombs of the Egyptian Avenue at the cemetery.

You can read more about Cemetery Records at

http://ancestorsatrest.com/
Posted by Brian at 10:58 AM No comments:


The Challenge of Finding Our Black Ancestor's Origins

Mary and Joseph were the grandchildren of Jonathan Butler, a black man living in the Queen's Bush in what was then called Upper Canada (now the province of Ontario)

It has been a challenge to research Jonathan Butler and his family.  Early 1800s Ontario records are sparse. We know that Jonathan was born somewhere in the USA circa 1790.  No specific location in the United States is known. There are no census records where his origins are noted.

We know he was black. He is listed on various tax, census and assessment records as "Negro" and "African"  We know his wife's name (Elizabeth Ginkins as seen in the adult baptism of his son Allen, my 3rd great-grandfather) but do not know her origins.

The earliest record for Jonathan is an 1834 Assessment record where he is recorded as "Negro Butler".
The last record of Jonathan is an 1840 "Census" which is really a tax and assessment record. He has not been found after that date - no death records, no burial records, no 1851 census record (although many of the 1851 census for Ontario are missing). We have found no record of his wife Elizabeth in any records of any year.

Jonathan's children are found in census records recorded as "African", "Mulatto" and in later years "White". We know from tax records that Jonathan had at least 5 sons and 3 daughters but we only know the names of two with certainty - Allen and George. Both married German women in the Waterloo area.

My 3rd great-grandfather Joanes Alexander Alan (called Allen) Butler was baptized into the Catholic Church January 26,1851 at St Agatha, Wilmot Twp, Waterloo Co. He was recorded as the son of Jonathan Butler and Elizabetha Ginkens. In his marriage record that same year (February 1851) he stated he was born in Toronto.

Allen's son Joseph, my great-grandfather, is another mystery. He disappears after the 1901 census where he is found with his wife and children living in Seaforth, Huron County Ontario. His estranged wife Caroline (Carrie) left Ontario for Detroit Michigan circa 1909. Family lore said that she left Joseph after some kind of scandal was discovered and that he "went out west". He was never heard from again although our research indicates he may have settled in Manitoba near the border of North Dakota.  If his wife can be believed, he was deceased by May 1918.

We have many challenges and puzzles regarding the Butler family and my black heritage.

1. How do we find our Jonathan Butler's origins in the United States? There are so few records for pre 1851 in Ontario and we have not been able to find what happened to him after that 1840 assessment record or where he was before the 1834 one. So we only have records of him for a six year time frame. We know he was in Toronto circa 1824 when Allen was born. But where was he before 1824 and where was he from 1824 to 1834 when he acquired land in the Queen's Bush?

2.  Where was Joseph Butler from 1901 to 1918? Was he in Manitoba? He had a brother Jacob Butler in Pembina North Dakota but we've not found any record of Joseph there. However this brother Jacob lived for several years in Montcalm, Pembina Valley Region, Manitoba. Did Jacob head there after leaving his family (or being kicked out as family lore states)? We are hoping his death record might have information on the birth place of his father Jonathan or mother Elizabeth.

If you have any suggestions or ideas for us in our search, please post them in the Comment section of this blog post. We definitely need advice on where to look next!
Posted by Brian at 11:44 AM No comments:

We may never know how the grave of John Murphy in Knockainey came to say he was 219 years old when he died. A mistake on the part of the Tombstone Engraver perhaps. Or maybe old John Murphy was a bit of a storyteller. The tombstone of the mystery man - who is surely a candidate for the Guinness Book of Records - has been discovered in the cemetery at St John’s Church in Knockainey by a local historian.

You can see more grave records at

http://ancestorsatrest.com/
Posted by Brian at 10:42 AM No comments: 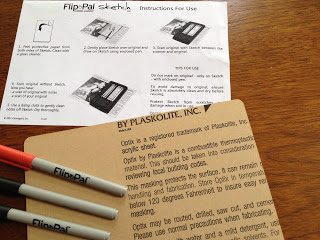 “A Sketch in Time!” coupon promotion:

Please place items in your shopping cart after you click on Flip-Pal Mobile Scanner, then use promotion code: SKETCH13.

These promotional codes cannot be used in conjunction with other promotion codes.

Doing More DNA Testing. Will it Show my African-American Heritage? 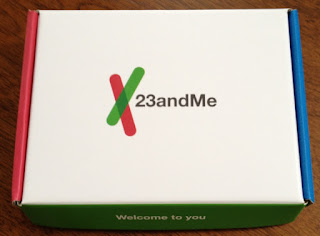 My 23andMe DNA kits arrived yesterday. I already had my Y-DNA tested at Family Tree DNA but wanted to try another company and see what kind of results I get.

My Haplogroup is RM-269 and I'm still reading up on this to understand it better. I know that to get my terminal branch of the Y-DNA tree I need to order the order the National Genographic Geno 2.0 chip but it's almost $200.00 so will have to wait while I save my pennies!

It's been a very successful journey through FamilyTree DNA. You can read about how my DNA results allowed me to find and meet some new cousins on my Massey lineage, at The Massey DNA Connection

23andMe focuses on genetic health issues and that's intriguing. But I'm also hoping for confirmation of my African-American origins. My 4th great grandfather Jonathan Butler was a black man who came from the United States and settled in Ontario Canada some time before 1824. I know very little about him 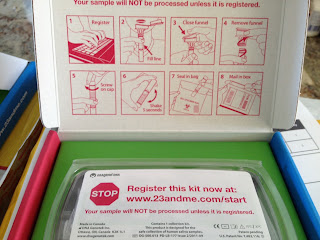 Next step: I'll provide the test sample and mail it back to 23andMe, then I wait.

Stories of ancient Indian settlement, colonization and frontier communities, slavery and war, early industry and intensive farming permeate our local history, but the past is sometimes hard to see for the present.

Read More
Posted by Brian at 11:31 AM No comments:

Email ThisBlogThis!Share to TwitterShare to FacebookShare to Pinterest
Labels: Cemeteries

Today we have the Coffin Plates of Isaac Monk and Anna Monk. Anna died in 1874 but the plate for Isaac has no date of death. However it looks like it would be from around the same general time. 1870s or 1880s.

For more coffin plates see AncestorsAtRest website where you will find over 500 to search through. 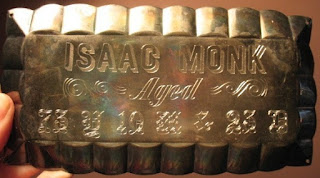 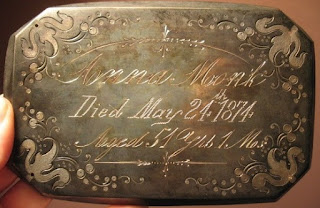 Read More
Posted by Brian at 11:26 AM No comments: