52 Ancestors: Edith & Martha Finch - Life in the Workhouse in England 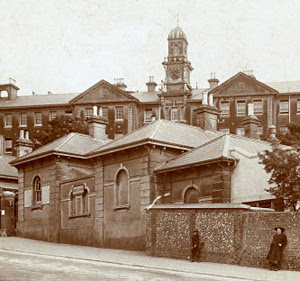 Amy Johnson Crow has a new challenge for geneabloggers called Challenge: 52 Ancestors in 52 Weeks. Amy challenges genealogists to write about one ancestor once a week.

A few weeks ago I wrote about my ancestor Elsie Phyllis Markham and the hard life she had, orphaned at 9 months old, pregnant in 1917 at 19...... Today I want to talk about her mother Edith FINCH and grandmother Martha FINCH and their lives in the Workhouse.

Elsie's mother Edith Finch died in November 1898 in London England at the age of 28. Her husband Albert Markham had died just one month before Edith. They had both fallen victim to Typhoid Fever. Three young children were left behind - Albert, Frederick and Elsie (9 months old)


Edith's life had not been without difficulties. She was born in 1870 in the Brighton Workhouse in London England to Martha Finch, an unmarried inmate of the Workhouse. No father's name was given on little Edith's birth registration but at her marriage to Albert Markham in 1895 she gave her father's name as Lionel and his occupation as Commercial Traveller. I've never been able to find out if this is true.

The census of 1871 finds Martha, age 32, listed as a pauper in the Cuckfield Union Workhouse with her 6 month old "pauper child" Edith. Martha has work outside the Workhouse as a cook in a family home.

In 1881 the family is still in dire financial circumstances. 43 year old Martha is living in the Race Hill Workhouse with another illegitimate daughter Esther age 23 and Esther's illegitimate son Arthur 1 1/2 years old. Edith is not with the family at this time. She may be the Edith Finch age 12 in the Brighton Industrial School in Sussex but the birth location for this Edith is not consistent with the actual birth location of my ancestor. However I believe the birth location is simply an error and that this is my great-great grandmother.

The Brighton Workhouse (also known as Race Hill Workhouse) sent pauper children to the new Warren Farm (aka Brighton Industrial School) in 1862 and it seems almost certain that Edith was sent there from Race Hill where her mother is found in 1881. [Source: http://www.workhouses.org.uk/Brighton/ ]

The lives of Martha and her daughters in the Workhouse and the Industrial School would not have been easy. People ended up in the Workhouse if they were too poor to support themselves, or if their family would not help them during difficult times. Often unmarried pregnant women were forced to enter the workhouse because their families disowned them.

Workhouse inmates were forced to do hard physical labour to help offset the cost of providing them with lodging and meagre food rations. For the most part, the inmates worked 12  hours of each day. Meals were simple with breakfast consisting usually of tea and bread or tea and gruel (a watery oatmeal). Lunch was their main meal of the day and it was usually a watery soup with bread, or a thin stew made of tough mutton or beef with a few carrots and potatoes. Their last meal of the day was tea with bread and butter. [Source: http://www.workhouses.org.uk/life/food.shtml]

In the 1891 census Martha Finch lists herself as a widow even though there is no evidence that she ever married. She is working as a cook in a family home and no doubt had to say she was widowed since she had at least 3 illegitimate children. A proper Victorian family would not have allowed her to be part of their family life if she were not considered "respectable". It appears she may have been a live-in cook which was probably her only opportunity to escape the Workhouse life.

As for Martha's 3 children, her son John (born 1863) was taken in by Martha's parents and appears to have lived with them his entire life. As to why they took in John but not Martha's daughters, I can't say. However there was contact between Martha and her parents as in 1871 12 year Esther Finch is staying with her grandparents and brother John.

Esther Finch had yet a second illegitimate child, Ruth, born circa 1887 in the Workhouse but in 1900 Esther married a widower named William John Arrow. William had been left with 5 young children when his wife died in London in 1898, possibly from the same illness that took Esther's sister Edith and brother-in-law Albert Markham.

It's a confusing family to follow, full of misfortunate and sad circumstances. Because of this I created a timeline summary to help me in my research.

1838: Martha Finch, my 3rd great-grandmother, is born to Charles Finch and Keziah Harding. Charles is a bricklayer. Martha is one of 10 children.

1861: Martha Finch is a dairymaid but living in the Workhouse. Her illegitimate daughter Esther is born that year.

1863: Martha Finch has an illegitimate son John born in Brighton Sussex OR is he the son of her younger sister Anna?