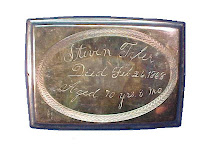 
I went and had a look in the 1860 United States Federal Census and I think this is the man we are looking for.

I cant say 100% that this is the Steven Tyler that this coffin plate belongs to but as it was with the coffin plate of Margaret Tyler who died in 1885 at the age of 80 I would say its a good bet.

This is a fairly common Coffin Plate for this time period but it may be possible to make some educated guesses that will tell us a little something about the family. The fact that the plate was purchased tells us that the family was not dirt poor. A coffin plate was a luxury. However it is a middle of the road plate as far as quality goes so they were probably not a rich family. Also the quality of the engraving is poor. This tells us that they probably lived in a more rural setting or small town. Coffin plates from a larger town or city generally have a better quality engraving.
Posted by Brian at 5:30 PM